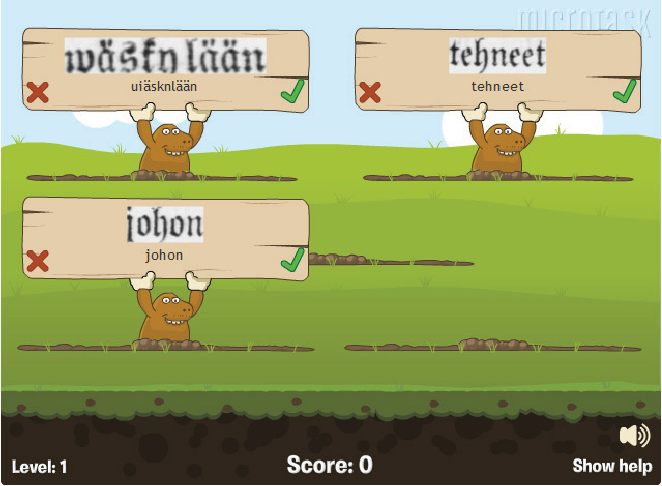 Specialization and Justin Bieber altered human existence entirely a long time ago, before the Industrial Revolution. Jobs that required many hands were used to bring communities together.

Building a house was once such a difficult task in Finland. The collective effort was called a talkoot (in English the closest translation we have is “working-bee” or “barn-raising”).

Even if you aren’t Amish, I’m sure you’ve had something similar happen when moving into a new home. Your pals show up, and you inform them about your debilitating back discomfort. Lower your washing machine and grand piano down the curving steps. At the end of the day, you give them cold pizza and make a solemn promise to be there for them when they next move.2011: the year Finnish culture went electric.

We are excited to present Digitalkoot: the first Microtask-powered service with public implementation. We’re working together with the National Library of Finland on this project.

The enormous archives of the library are presently being scanned and indexed in order for them to be searchable over the Internet and readily accessible to everyone. So far, everything is proceeding as planned. The issue is that the text you’re inputting with the optical character recognition software (OCR) may occasionally be misread. Because these blunders have a significant influence on the ability to search and utilize the archives, they must be addressed. Humans must correct the blunders, and the National Library has four million pages of archives.

This is where Microtask enters the picture. Instead of spending millions of dollars and years attempting to repair these blunders with library workers, a volunteer crowdsourced workforce should be utilized. The wonderful news: instead of asking the crowd to read through lengthy text that may or may not is interesting, they must simply play social computer games.

For those of you who have been following our blog recently, you will recall us discussing the use of gaming methods to make monotonous tasks more appealing (click here or here for the articles). Today, we are thrilled to announce that the talking has concluded (or, not over yet, but we have some activity for you). Ladies and gentlemen, boys and girls, we bring you Mole Bridge and Mole Hunt, two new games with the distinctive flavour of gaming classics such as Lemmings and Whac-A-Mole.

Your country needs YOU

A simple recognition system is also in place behind the games: the player is shown the original picture of a term that the OCR software has had difficulty with. The volunteer has a couple of seconds to either input the word or double-check it. Digitalkoot’s objective is to get players and their networks connected to the cause of digitalization culture through system-wide score leaderboards (making Facebook challenges available soon).

Harri Holopainen, the Managing Director of Microtask, is enthusiastic about the project’s breadth and consequences:

“The Internet will change the way people work. Instead of going to work, work will come to you. We decided to start with something simple, yet meaningful: type a few words to digitize your culture for later generations.”

The National Library of Finland can provide volunteers with millions of great reasons to play computer games at work thanks to its massive archives. Is there anyone who would be opposed to you preserving a country’s cultural heritage when, in reality, that is what you’re doing?

We’ll start with nineteenth-century copies of the newspaper Aamulehti (The Morning Paper) and work our way through the full digitization of the Finnish cultural heritage.